Reading through the news, I came across the Bloomberg BTC pipeline explosion piece. 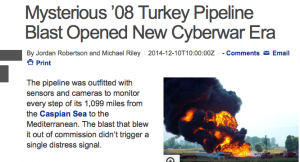 If cyber attacks on the pipeline were news to you, they shouldn’t have been.
Critical intelligence covered the cyber aspect of this story (though perhaps not in the same set of details) in its report entitled “Report claims Russia conducted cyber attack on strategic pipeline” issued August 30, 2009. Critical Intelligence has made the report publicly available.

Among the interesting things we found those five years ago was an advanced technology threat assessment for the pipeline.